Clans allow you to team up with other looters and combine your power. All clans have a vault that acts as a shared inventory for all the players in the clan.

The Clan Bank and Vault

You might not have noticed it but every player in Mercenary Wars has power, you can check how much power you currently have with t-power:

This power is contributed to your clan! If you have 5 power, your clan would be able to store 5 items.

What's the Point of Power?

Your power can fluctuate. Every time you die you'll lose 2 power, down to a minimum of -5. This directly affects your clan's power and makes the clan vulnerable to raids!

Your power will passively increase by 1 every 2 hours until you hit the maximum of 5 power. 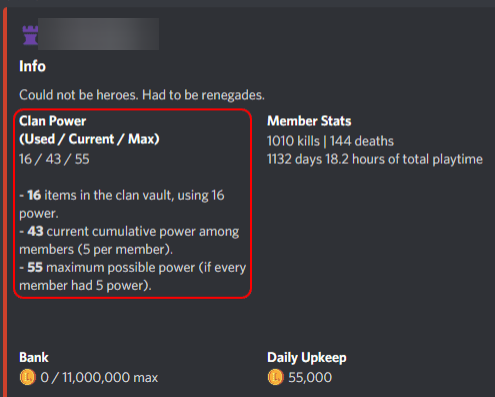 When a clan is using more power than they currently have, they can be raided with t-clan raid.

When you successfully raid another clan you will see a message telling you to pick an amount of items to steal from their vault. The number of items you can steal is the amount of power they are using minus their current power.

After the raid is finished, your clan will be put on a 1-hour cooldown before being able to raid any other clans. The clan that was raided won't be able to get raided again for 24 hours.